Last fall I hurriedly converted an old utility trailer into a boat trailer for my 12 foot Ooze Goose. The box was stripped off the frame and some rails were added for the boat to sit on. The wheel bearings were replaced and a hasty fix done on the lights. The trailer hadn't been on the road since 2006. One more year unregistered and it would have disappeared from the state registration system, which would have been a pain.

It survived thousands of miles of hard travel. Once, due to a missing pin in the trailer hitch, it exited the highway at 65 mph all by itself. While in Florida a car clipped it, scuffing the paint but doing $2800 damage to the car. It also survived a flat tire in Louisiana.

On the way back one of the springs broke in Massachusetts. Fortunately, I was able to drive it home.

During the first attempt to fix it we discovered no replacement springs were available in my area. It spent the summer at my friend's house, waiting for new springs. After an extensive on-line search suitable springs were found from Northern Tool for a reasonable price. I had the springs, but life got busy for everyone in the summer.

So finally our schedules meshed and another attempt was made on the repair job. While it was apart my buddy did some welding to reinforce a few weak spots on the frame. We were not able to buy all the spring mounting hardware off the shelf as the design is obsolete. For $13 I was able to get some parts fabricated at a local shop and my buddy was able to build the rest.

In the end the whole repair job ran about $80 in parts. Some people wonder why I'd bother fixing an old trailer rather than buy a new one. Have you priced new trailers lately? The old trailer isn't fancy, but it does what I need it to do. 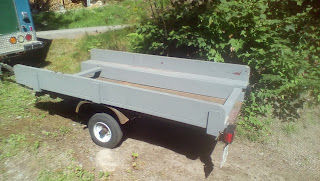 By the way, I originally bought the trailer used for $50. It spent many years hauling firewood before being converted to haul my boat.