After suffering though rain the better part of the week, the sun came out. Temperatures only got into the high 40s, but that's good enough. This is the end of October in the Great North Woods of New Hampshire. It only gets so warm.

The cockpit of the boat holds rainwater nicely. That might be of value some day, but it was an awful lot of bailing. I made a nice bailer from a square shapped gallon juice jug. Sure beats spending $8.99 at West Marine.

I enjoyed one more row on the lake. Eventually I made my way to the boat landing. The trailer was a bit of a pain to back up. My van is wider than the trailer so when going straight back the trailer can't be seen. By the time the trailer came into view it was time to make a hard turn in the other direction. The whole contraption zigzagged down the ramp.

The trailer sank the way it was supposed to. That's not to be taken for granted. When I was down to the Florida Keys I saw a trailer that was built from timbers so large it floated. The owner had two large ingots of lead attached to the back to get it to sink. 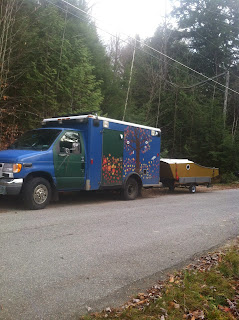 My boat is so light that it was very easy to maneuver it onto the trailer. The side rails worked out well to guide it into position. I'd guessed on the balance and got it pretty much where it's supposed to be. Theres just enough weight on the hitch to keep it from bouncing off the ball, yet not so much that I can't easily lift it and move the trailer by hand. Pretty darn good. With the boat on the trailer I can see what's going on back there, so backing it into the driveway was easy. 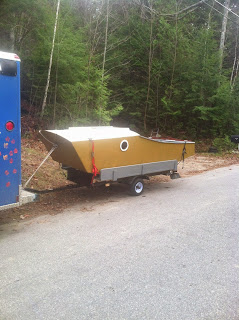 I only road tested the trailer a couple miles. The bearings are shot. The lights don't work, and the registration expired back in 2006. Now that I know the boat rides nicely on the trailer, I can fix those minor concerns.