In these interesting times it’s a bit difficult make any sort of long range plans. Between the pandemic, economic collapse, social upheaval, and natural disasters, it’s not a good time to travel.

I was talking to a paramedic friend of mine. He thought that the schools would eventually all have to go to remote learning. He expects the virus to spread easily in a school environment. His kid is staying home. Fortunately for him, his wife works from home so can be there.

My friend was also appalled with Florida’s decision to remove restrictions from bars and restaurants. With that in mind, I’m happy with my decision to stay home for the duration. Who knows what the world will look like a year or two down the road? While I can guess, that’s no way to plan. If 2020 has shown us anything it’s that we can expect the unexpected.

We are fortunate to have gotten some rain finally. That takes the edge off, but we’ll need a lot more. There are wells not far from me that have gone dry. Our foliage season was short up here in the north. The dryness hastened things along. The leaves on many trees looked burnt and crinkled, like they’d been too near a fire. Drought will do that. Now the rain is washing a lot of leaves onto the ground.

My lovely wife and I are doing well. The plan is to fort up as much as possible and avoid the flu and Covid season. Progress is being made on home projects. There will be plenty to keep me busy.

Posted by Sixbears at 2:35 PM No comments:

Dash to the coast

My lovely wife and I took one last trip to the coast while the weather was good. I think the Portland Maine lighthouse is becoming one of favorite places to visit. It certainly helps that they allow dogs in the park.

We have friends in southern Maine and they are well set up for overnight company. They pitched a large canvas pavilion in their spacious backyard. For the convenience of guests there’s an outdoor comfort station in a separate small tent with a portapotty, sanitizer and a hand washing station. It makes it easy to socially distance.

They put on a good feed for us and we enjoyed an evening around the campfire. That’s the only time we’ve spent the night away since we came back from Florida in the spring. The weather was unusually mild and were lucky to be able to take advantage of it.

Currently we are at the peak of foliage season here in Northern New Hampshire. It’s been unusually dry and fire danger has been high. However, we are expecting about a week of rain that’s definitely needed. The overflow from my well has stopped flowing. That’s only happened once before in my memory. I went down to the well to upgrade the plumbing connection at the pump so it wouldn’t fail at an inconvenient time. That’s when I noticed the overflow had stopped, but fortunately the well is still full of water. It’s just a couple inches lower than normal.

A lot of people around here a dreading winter. I’m not going to worry about it. Attitude is everything. There is no bad weather, only bad clothes. With all the turmoil going on in the world, I’m kinda looking forward to being snowed in. Nobody riots during a blizzard.

It will be a time for good books while sitting by the fire.

Not a bad place

I’ve been very fortunate during these interesting times to have a place out in the country.

This view of New Hampshire’s White Mountains is from my lake. 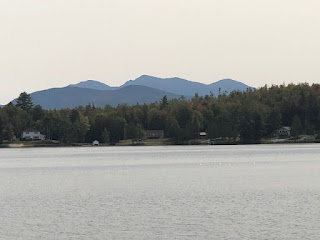 There’s a bit of smoke haze from the western fires, but not too bad. Right now it’s still probably some of the best air in the country. Where my younger daughter lives on the west coast it’s super smoky. She’s had to put her lights on in the middle of day due to the smoke blocking out the sun. At least her place is not currently under direct threat. However, she’s been told by authorities to pack an emergency bag in case.

I also feel for all the folks dealing with a very active hurricane season. When you run out of names for storms you know it’s a bad one. They then will go with Greek letters. Hope they don’t run out of those. What would be next? Disney characters?

While we haven’t have the fires they’ve had out west, it’s been a dry summer. A friend of mine who works for the Forest Service as a firefighter did a 21 day stretch without a break. Fortunately the fires have been small, but there have been a lot of them. Most have been started by campers not putting out campfires properly.

There are a lot more people out in the woods taking advantage of free dispersed camping. I even ran into a good sized group of people doing official bird dog trials. Normally they’d meet in Maine, but due to Maine’s 14 day quarantine requirement they relocated the event to New Hampshire.

Summer’s nice weather allowed for us to socialize outside with people. Winter might get a bit grim. I’m going to avoid being inside anywhere but my house and maybe a few essential short term shopping trips. Whatever it takes to stay healthy. Might even skip the shopping trips.

Frankly, I don’t think I’m going to mind being snowed in at all. It’s hard for people to riot in a blizzard.

We’ve come to the unofficial end of summer. The lake is pretty busy this holiday weekend. Heck, the whole state of NH is packed with visitors. The state has taken to requiring day passes for the state parks. Many are full up.

Of course, I’d rather be dealing with a tourist invasion that daily riots in the streets. Portland just had 100 straight days of protest. Some places have definitely had a long hot summer. While I’m in no hurry for the cold weather to settle in, nobody riots during a blizzard.

2020 has been a strange year. I’m expecting some kind of black swan even between now and the end of November. That’s weird when you think of it as black swan events are supposed to unexpected. This year I’ve learned to expect the unexpected.

Hope everyone is being safe. Don’t take unnecessary risks. Don’t go around to super spreader events and avoid going to protests looking for a fight. Neither of those activities tend to end well.