From green zone to red zone

Our local virus condition quickly went from green to red. A lot of cases can be traced back to the Federal prison. Kid’s sports was another problem. Then there was also a local restaurant that had issues. Currently the schools are shut for at least two weeks.

We used to have free travel into Vermont, but now that’s been changed. Of course, Canada is still off limits. I’m starting to feel a little closed in right now. Might as well hunker down for the duration.

Weird year for me

I know. That doesn’t make me special this year. Normally I’d be getting ready to head south for the winter. Instead I’m setting up for the long cold winter.

It really hit me when getting the boat ready. Last year I was making sure it had a good coat of bottom paint. This year I’m making sure the it can handle huge amounts of snow on the cover. Normally my wife and I are stacking as much stuff in the boat as we can. That way we don’t have to load it up before leaving. This year we emptied it out. Even the sails will spend the winter in the house. Gas has been drained from the outboard instead of just making sure it has stabilizer.

The house is better winterized. Still not 100% on that, but mostly there. We’ve already had a couple snow storms with more on the way.

At least I get to vote in person. Voting absentee for the primary was a huge pain while on the road. Speaking of voting, don’t be a jerk. No matter how it turns out.

There’s a huge survival skill that nobody talks about. It’s being able to get along with people you don’t agree with.

A mile too far

We finally got a break in the weather and our schedule. The wind was calm and the temperature got close to 60. It was a good day to finally pull the sailboat out of the water. Next week mixed precipitation is expected.

I motored the sailboat over to the boat ramp while my lovely wife drove the boat trailer over. Loading went well. There was no one else at the ramp so no pressure. Taking the boom off and dropping the mast was a smooth operation. It looked like we were all set.

Part way around the lake one of the trailer tires blew. It was going to be replaced weeks ago, but I couldn’t get the old wheel off. The guy who put it on with a power wrench tightened it too much so I gave up. Only needed a couple more miles out of the old tire, but it was not to be.

Rather than try and mess around with it I drove the last mile with a flat tire, ten miles an hour the whole way. It’s safely in the driveway now. It’s much easier to change a tire in my driveway than on the side of the road.

Looks like it's that time of year again. Woke up to big heavy snowflakes falling from the sky. This probably won't last, but it won't be long until it does. 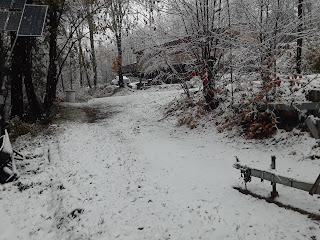 Living on the lake there are a few things to do before the snow flies. My son-in-law gave me a hand a few days ago pulling the swim raft onto shore. That went fairly well, but it’s certainly not a one person job. I’m glad I had help.

Thursday’s plan was to pull the boat off the lake. That didn’t go quite as well. It was a warm day for mid October in New Hampshire’s North Country -around 70. Seemed like a perfect day for it. My lovely wife and I planned on one more afternoon of sailing.

I’d moved the trailer and tow vehicle to the boat ramp, so that was ready. Unfortunately the wind picked up a lot more than predicted. The 3 to 5 mph predicted winds turned into wind strong enough to lean the sailboat right down past its gunwales. That’s with much reduced sails. After a while it was no longer much fun to be sailing.

Unfortunately the wind was blowing across the whole lake to the boat ramp. There were whitecaps. That did not look like it would be much fun trying to load the sailboat. We decided to put that off until later in the week.

By then the wind was blowing so hard I was concerned about being able to drop the mainsail. In the end I pulled the boat right up next to shore where some trees blocked most of the wind. Then I dropped the sail in record time. After securing it we motored the whole way across the lake to our beach. It’s back on the mooring.

We have some rain in the forecast, but after that I’ll just motor directly to the boat ramp and pull it out. The long range forecast has some decent weather predicted. One year I actually had to pull the boat in snowstorm. That’s something I definitely do not want to repeat.

The Spanish Flu hit in three waves and went on for roughly three years. There are few reasons to believe that this pandemic will be over any quicker.

Hear me out. The big difference between now and 1918 is the state of our medical system. Our big hope is for a vaccine. Unfortunately, just about all the major players in the vaccine game are having issues. Many safety trials are on hold while side effects are being evaluated.

We don’t even know if a vaccine will work very well. It’s discouraging that people are getting infected for the second time. Not only that, the second infection is often much worse than the first one.

On the bright side, we now have much more effective treatments. While not a cure, they can keep more people alive. However, that requires a fully functional health care system. That’s a major problem in countries where health care is tied to one’s job. With unemployment high, many have lost insurance.

This is not to discourage anyone. I know there are many people who are having psychological issues with the duration of this crisis. Some are pretending it’s over, and that’s one of the things fueling the growing second wave of infection. Cold weather in the north is another problem with people crowding in together. The spread is often happening through small family gatherings right now. That does not bode well for the holidays.

I’m assuming most of my readers are mentally tough enough to deal with reality. We will take it one day at a time. If it is over sooner, great. If not, we endure.

There are a lot of out of state license plates still hanging around. Usually, this time of year, we have the place to ourselves. Sure, there are folks that will come up on the weekend, but now they are here all week. A good part of that is that they are new residents.

Housing here in Northern New Hampshire is going fast. It’s common for buyers to offer 30% above the asking price to assure they are going to get it. My neighbor works in the school system and they are dealing with an influx of new students.

This, my friends, is what one version of bugging out looks like. Most of these new people are escaping big cities. They have the ability to work from home and are taking advantage of it. Preppers tend to think of bugging out as someone with a bug out bag. That’s the low end of the spectrum. The high end is a massive yacht with it’s own on board doctor and security. In the middle we have these urban folks moving into modest homes in the hinterland.

There’s a sense of panic in the air. That explains the premium they’ve been putting on quick sales. This is the 11th hour if you are looking to avoid trouble in the big cities. Heck, things look pretty iffy in a lot of the moderate sized cities. A friend of mine lives about a half hour outside of a city of about 70,000 people. He’s upped his security quite a bit with better doors, locks, walls, and security windows -plus other interesting things.

Another popular bug out option is the bug out vehicle. Frankly, when winter sets in most of those are impossible to keep warm. The far north is not a good place for mobile living. That’s why the smart money is establishing themselves in small towns. This influx has been happening at a good pace ever since about March.

While there’s been some growing pains, most of the towns and small cities are handling the increase fairly well. However, space is running out. Time is also running out.

Recently I received an unexpected check in the mail. Within twenty-four hours I’d turned all it into food. If you’ve got anything at all to spare I’d recommend you stock up. There are food shortages on the way. Of course, I might be wrong about that, but you’ll eventually eat that food anyway.

Forget about buying special survival foods like MREs. Prices have gone through the roof and delivery times are long. Get regular canned and dry goods for storage. Stock on up spices. That’s one of the things added to my pantry. When you’ve got a lot of beans and rice being able to spice them in different ways sure makes life better.

Don’t rely upon hunting. During the Great Depression the woods were pretty much cleaned out of anything edible. Game laws were ignored because that’s what hungry people do. I’m still doing some hunting, but I’m not relying on it. If you do plan on hunting I hope you already have your ammo as there’s nothing in the gun stores. Locally even 30-30 is sold out.

I was going to make a big long post about this, but decided against it. Listen folks, wear your protective gear. Spend a little extra and get gear that’s high quality and comfortable. Not everyone has helicopter access to the best medical care in the world.