One in the hand 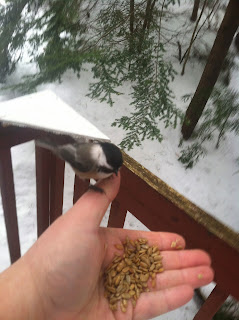 I love these little guys. Chickadees always cheer me up on a winter's day. This is one of the things I do rather than watch television. 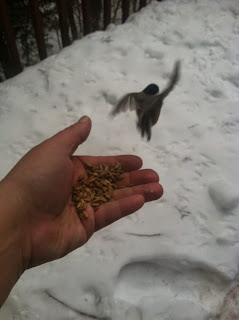 This is a Red Breasted Nuthatch making a quick exit. He's a bossy little bird that demands respect from the Chickadees.


Only wish I had my camera handy the day two Blue Jays and a Squirrel were fighting over the seeds. While they were going at it the little birds were darting in and out and making off with the loot.

Chickadees were landing on my finger even before my wife decided to start feeding them. They are friendly birds. Now I can't do anything outside without putting out a handful of seeds first. If I don't they buzz all around me. Can't even check the mail without them sitting on the mailbox.