Does this look like a winter project or what? 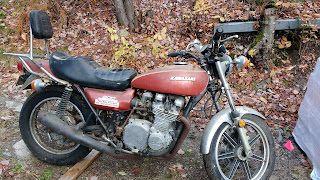 Years ago the shed was slapped together from some scrap lumber someone donated to me. The rot got to it. Both wheels had dropped through the shed floor. They were also flat. Just to make it even more interesting, the wheels would not turn as the brakes had rusted a bit. If I remember right the bike weighs about 550 pounds. It took everything I had to drag the bike out of the shed.

Once out of the shed it was possible to pump up the tires. The clutch cable was frozen, but a bit of force got it loose. Because the back wheel wasn't turning I thought it might have been locked into gear. That wasn't the case. The drum brake has a bit of rust and just did not want to turn.

The shed is located up in the woods and the tax assessor never found it. Good thing it was downhill to the house and there were wet leaves on the ground to help the bike slide. By the time I got it to the pavement the wheels were turning. The front wheel freed up completely, but the back still dragged. At least I was able to push it down the driveway.

The bike is filthy. According to the license plate the last time it was on the road was 2002. When I parked it I thought it would be on the road the next summer. Then life happened. It was stored with a full tank of stabilized fuel. I'm not sure how long stabilized fuel is supposed to last, but it certainly isn't 14 years. There's about a ¼ tank of foul smelling goo left.

One good thing I did was spray WD 40 in all the cylinders. The kick starter was able to easily turn the engine over. At least the pistons are free.

I'm going to clean up the fuel tank, change the fuel lines and the motor oil. Then I'll drop a new battery in it and see if it turns over. If it runs it will go down into the basement where the rust, grime and electrical issues can be dealt with. The seat is stiff and cracked, but I've a replacement hanging in my basement. In fact, I've got a lot of decent items from a parts bike.

The tires look good. The chain and sprockets had been replaced the year it went into storage. It's not my goal to do a full restoration. The plan is to get a drivable bike back on the road -hopefully for not a lot of money. After that I've got to decide if I want to ride the darn thing or sell it. To be honest, digging out the bike brought back some great memories so I'll probably ride it.