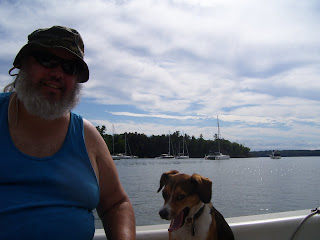 After a breakfast of coffee and sausage sandwiches, we headed down Otter Creek and back into the lake. Apparently “light and variable winds” can mean zero winds, like the morning before, or 3 foot whitecaps, as was the case then.

We beat into the wind most of the day, often sailing near maximum hull speed. It was a blast. Lake Champlain had an awful lot of boat traffic, mostly sailboats. As the day wore on, it occurred to me that we had the smallest boat on the lake. Boats that from a distance looked small, on closer examination, were at least 6 or 7 feet longer than our boat. While the ride was “lively” I didn’t feel were taking unnecessary chances.

We pounded through the waves until lunch. I hove to in a bay where the waves were a bit smaller. It gave me a chance hit the head and get some lunch. Then is was back out into the main part of the lake, where the wind and waves were much more interesting. The ferry boats kicked up some big waves of their own, creating some confusing cross chop. I prudently stayed out of their way.

By the middle of the afternoon we decided to head back to the boat ramp. We ran with the wind with just the small jib sail. Even so, our speed was 4.5 to 5.5 knots. Back at Otter Creek, we dropped the sail and motored the last mile to the boat ramp. Loading the boat on the trailer went well. All that practice is starting to pay off.

On the way back home, we stopped at a good restaurant in Burlington. What the heck, we really hadn’t spent hardly any money at all until then. Fuel costs were small as we used our waste veggie oil powered truck to pull our wind powered boat. Only used about a gallon of diesel for the truck and a gallon of gasoline for the boat. After an active day on the lake, we did justice to good cooking.

We made it home through 150 miles of moose infested back country roads without incident. All in all, it was a great trip. Very few problems, and nothing that couldn’t be worked around. I’ve some ideas for a few minor boat modifications, but that’s just to increase comfort.

The lake’s a good 122 miles long. We only really got to see about half of it. Next time we hope to see the other half. It would be possible to spend most of a summer sailing on that lake without getting bored. Then one could head south through the locks into the Hudson River. From there, it’s down to the Atlantic and the world. One could head north through the locks into Canada and the St. Lawrence Seaway. From there, one could go east to the north Atlantic or west to the Great Lakes.

We definitely will have to go back to Lake Champlain. After all, we didn’t even get to see Champy, the illusive lake monster.