The weatherman was wrong again. This time he was wrong in our favor. It was a beautiful day. We are heading out Tuesday. Our plan is to anchor out for a while so I pumped up the kayak so it'd be ready to use a dinghy.

The day was so beautiful that we decided to paddle down past the mooring field. The field is pretty extensive and almost all the balls were occupied. Beyond the mooring is where things got funky. That's where the free anchoring is. There's a lot of shabby looking boats down there. Some were half sunk. There were some boats in good repair, but they were in a minority.

Eventually we came to a nice little park with a kayak launch. We had a nice light lunch in the park before paddling home. By then the tided had turned so we paddled against it all the way back. My lovely wife and I were definitely ready for an ice cold beer by the time we got back to the marina.

Nobody here but us sea birds. 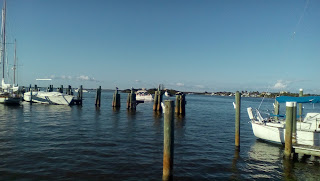