My boat insurance company (Boat US) wanted current pictures of the Oday 19. Since I had to take them anyway, why not share with my readers? 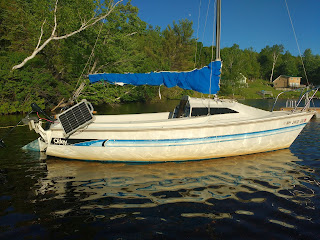 The original 6 hp gas motor was replaced with a 55lb thrust electric trolling motor. It moves the boat at 2.5 – 3 knots, which is fast enough. The motor doesn't get much use. For example, today it was used for about 5 minutes. The wind was from a bad angle for sailing to the beach so we just motored in the last 100 yards.

The little 30 watt solar panel has no difficulty keeping the battery charged. The old gas motor could move the boat at hull speed, 5.5 knots. That was fine, but I really don't like dealing with gasoline. The gas outboard was a two stroke. That meant I had to mix oil in the gas, not my favorite thing. While the trolling motor is slower, it's quiet and clean. When I go on a long trip I'll add another battery or two plus an additional 100 watts of solar power.

I'm finally getting around to rigging up my little 12 foot homebuilt Ooze Goose for sail. The plans called for a dagger board but I didn't want to put a hole in the bottom of the hull. Instead, the boat was going to have leeboards. That idea was also scrapped. Instead I decided to put a couple of shallow bilge keels. The boat needs a few more inches of draft, but bilge keels have no moving parts. They are rugged enough to hold the boat on the hard with a full load. Simplicity won out.

Leeboards had already been roughed out. Fortunately I can use them to build the rudder so it's not much loss of time and material.

My cousin was looking for an old sail to decorate his man cave, which has a nautical theme. The old Oday sail was traded for an extra mast and sail from one of his small sailboats. The sail should power the Ooze Goose without any difficulty.

The days are long and the weather is good. It's good to be on the lake.