You never know what's going to motor past when you camp along the river. 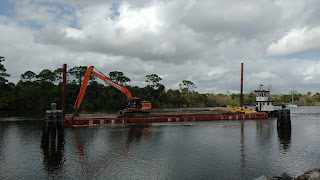 We had a pleasant night in the tent. It was nice and cool. We didn't even put the rain fly on, so there was tons of ventilation. I could always run the fan in the van, but it's not like a fresh breeze.

The ranger came around with a paper telling us what they'd do in a shutdown. We'd have until Friday at 10 a.m. to leave. Power and water would be shut off and the gates locked. Since we planned on heading north on Friday, that's not a big deal for us. However, the campground we are booked into next is also Federal. As of Wednesday afternoon it looks like Congress will work out a deal in time.

I've been doing a lot of biking here. There's a nice visitor's center next to the campground. They claim to have wifi, but it's so weak and slow that I went back to using my hotspot.

Mostly we've been sitting by the river watching the world go by. Lot's of interesting boats on the water and plenty of wildlife to keep us entertained.