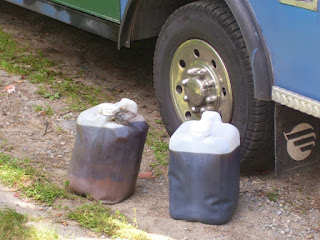 The jug of waste veggie on the left is one that I’d forgotten about. I had about 1/2 dozen jugs of veggie in an old utility trailer. The oil in the old jug is at least 4 or 5 years old.

For comparison, the jug on the right is one I just picked up from the restaurant.

The oil in the left jug is partially hydrogenated soybean oil. Notice that it’s a slightly lighter color at the bottom of the jug. That’s oil that’s still partially solid. The photo was taken when the air temperature was about 70 degrees. Once the jug sat in direct sunlight for a few hours, it became totally liquid.

The new jug is canola oil. It stays a liquid down to about 15 degrees. This stuff is much easier to deal with during cool temperatures. I used to keep a few jugs of soybean oil behind the woodstove to keep it liquid. I’m really glad my oil source upgraded from soybean to canola.

What do I do with the old veggie? Use it in my van, of course. It might be ugly and old, but it burns just fine. With diesel approaching $4 again, I’m not going to throw away any usable fuel. The heated veggie fuel tank keeps the soybean oil hot and liquid -no problems feeding it to the engine.

I did learn a valuable lesson. Waste oil can keep for some time. I’m pretty sure it keeps much longer than untreated diesel.