Said the Fish and Wildlife officer. I asked her what kind of weird stuff. Well, she said, there was that time a guy dismembered his wife just down to the end there. They never did find most of her body. Turns out this is also the area they release alligators that show up in people's swimming pools. Normally they release them at the far end of the park, but there's a six footer they dumped in the canal on my doorstep. We keep the dog away from it. 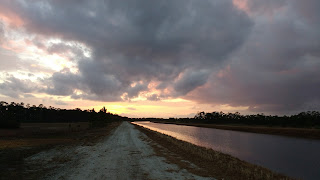 Yep, that's the area where we are camping. Pretty isn't it? The only problem we had was from the party animals, but the officers sent them on their way. It was quite Sunday night.

One the tricks I learned about free camping spaces. Leave a place keeper tent set up. That way no one takes your camping spot when you take the van into town. Apparently, technically, this is a tenting area only, but the officers don't enforce that. They said they'd only have given me a hard time if I'd tried to back in a 32 foot long motorhome. 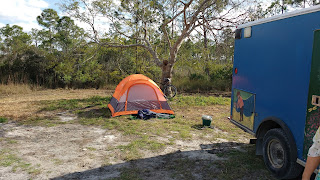 My new friend Mikey came through with the eggs. We woke to find three dozen of them in a coffee container by our folded up camp chairs. I got to thank him later in the day. He says he might show up in the morning with some of his homemade sausage. 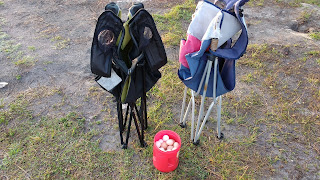 We are actually enjoying our stay here. It's not that far into town, so we get out to civilization now and then.