We had a stop here at the Albany New York train station. It was a nice break. We walked around and checked out the place. My lovely wife and I even went outside for a while. That gave me the false impression we’d do that more often. 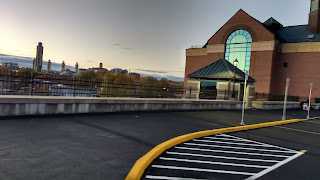 Our stop in Denver was just long enough to get to the end of the train platform, ride a couple of random elevators to the wrong place and then hoof it back to our train.

When we got to Reno the conductor warned us not to go to the casino. He said there was just enough time to run inside, put a coin the machine and then head back to the platform in time to see the train leave. He claims they leave people there all the time. They do not wait.

We did see one exception to this leave anyone late behind policy. Apparently the cook stepped out on one stop and the train left without him. They quickly noticed he wasn’t on board so they backed up the train. You don’t leave without the cook.

We did have some time in Chicago as we were changing trains there. We went and caught lunch at someplace not on a train. Our return trip is supposed to have an even longer layover, so we have some plans.

If you are a smoker you’ll probably find it tough to get your fix. Trains are nonsmoking. They do let you smoke at most of the short stops, but there are some fairly long gaps between those stops. Smokers have fewer stops than they used to because they left butts littering the place.

Our train ran into some delays due to broken tracks. It felt like they were trying to make up time by shortening the stops.