On to Pelican Bay

We spent a peaceful night at anchor off Picnic Island. In the morning I inflated the kayak so we could take the dog to shore. While I was inflating the kayak and assembling the seats and paddles, my lovely wife made up a thermos of coffee for on the beach. Nice. Clever Girl.

We'd never practiced getting in and out of the kayak with this sailboat. We managed just fine. Leaving Picnic Island was not so easy. There is a very fast current next to the island. That in itself makes it hard to raise the anchor. To make things worse, the wind, working against the current, had spun the boat around and wrapped the anchor rope around the keel. I could not pull it free by hand as the current was too strong.

However, but moving the anchor rope from the bow to the cockpit winch the angle changed enough to free the rope. The current still had to be dealt with, but now I had the mechanical advantage of the winch. That did the job.

We didn't get too far before running aground -in the channel. Then the wind pushed us into the shallows but good. Normally I'd row an anchor out and winch us off. The problem was that we were in a very narrow channel with a tremendous volume of boat traffic.

By taking down the sails and reversion the motor we were able to ever so slowly claw our way back to the channel.

After that we had a great day of sailing. The only downside was all the boat traffic kicking up huge wakes and tossing us around like a cork in a washing machine. The wind completely died a few miles before we reached Pelican Bay. Our trusty 2hp Honda outboard got us into the Bay.

There are a lot of boats anchored here. No doubt the holiday week is to blame. Even so, we had no difficulty finding a place to anchor. I've been thinking about Pelican Bay for months. Ed Robinson wrote a series of books, both fiction and nonfiction in which Pelican Bay plays a prominent role. In fact, I'm told the author lives on his boat and can often be found here. Although the last I head he's down to Marathon in the Keys right now.

We only had a few light snacks while sailing. Due to the bright sun and warm temperatures I was more interested in keeping hydrated so filled up on water. Once the anchor was set, I cooked up a big chicken and pasta dinner. By then we were more than ready for a decent meal.

The sun had started to set by the time we were done. I took a cold beer and my tablet out into the cockpit and took a few photos in the fading light. 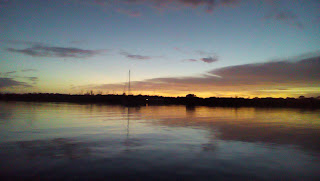 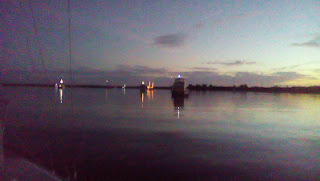 By the way, it's our 37th wedding anniversary.