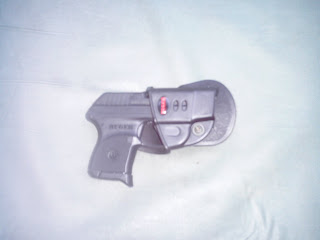 Recently started carrying my Ruger LCP in a concealed holster. After checking out different reviews on the net, I decided to go with the Ruger Fobus holster.

When it first came it, the holster held the gun so tight that it was really difficult to remove the gun at all. Fortunately, it's adjustable using a Phillips screwdriver. With a little playing around, the sweet spot was soon found -tight enough to secure the gun, but not so tight that I couldn't pull it out.

The paddle part fits inside the pants. Retaining prongs are supposed to go below the belt. I found it even works well with shorts and beach pants that don't have a belt. The prongs catch elastic waistbands and drawstrings well enough.

It does take some practice to execute the draw correctly. A quick snapping motion is needed to remove the gun. Slow and steady doesn't do the job at all. The draw must also be at the proper angle, straight in line with the holster. That's to hinder someone else from drawing your gun.

The Ruger LCP in 380 is such a small and lightweight gun that I wasn't going to use a holster at all. It fits in the pocket just fine. Problem is, I tend to put a lot of other stuff in my pocket, often without really thinking about it: car keys, multi-tool, pocket change, bottle caps -you name it. That causes two problems. It could be difficult to dig the gun out should I ever need it in a hurry. (thus defeating the whole idea of concealed carry.) Secondly, I was afraid the gun would get scratched up from all the junk in my pocket.

The holster clips on fast and easy. That's important. If it was a hassle, I'd wouldn't get into the habit of having it on me. A long T-shirt covers the gun nicely. It's a comfortable carry, also important.

Currently, the little Ruger is loaded with Winchester Supreme Elite hollow points. No sense carrying a gun if doesn't a bit of a sting to it.