The sun at work 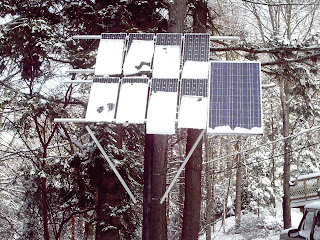 This is a shot of my solar panels. It snowed the night before, about 5 inches of heavy wet snow. The sun is just starting to hit the panels. The one on the far right is east and is getting the sun first. The snow melt pattern neatly shows the sun's progression. Soon after this shot was taken, all the snow had melted off. If I was in a hurry to clear the panels, a swift kick to the big black center pole would usually do the job -primitive, but effective.

Notice the panels are mounted straight up and down instead of horizontally. The snow slips off better this way. Many commercial solar panel racks mount horizontally -it saves rack material. Works fine outside the snowbelt.

My location is close enough to the 45th parallel to use it for a baseline for panel angle. This time of year, the panels are at a steep 60 degree angle. Sure helps the snow slide off. Spring and fall angles are 45 degrees and the summer angle is set at 30. The angle is changed by unbolting the two poles and moving them to the threaded rods mounted to the center pole.

Changing the angle pays off, but this far north it's not worth the expense to use a rack that tracks the sun. It'd take forever to get your investment back. The current thinking is that the money would be better spent buying a few more panels.

Built my rack myself using local materials and saved a bundle. Notice the extra square stock hanging off the side. The original idea was to add the same make and model panels as funds became available. By the time there was money in the budget, those panels were no longer manufactured. Too bad, as I had predrilled all the mounting holes.

The large panel on the far right was added about a year and a half ago. I bolted aluminum channels that fit right over the existing square stock. Wire ties were used to temporally hold it in place while bolt holes were drilled. Stainless steel hardware was used to bolt it together.

Took the opportunity to upgrade to an Outback charge controller. Not cheap, but a better investment than a 401K.