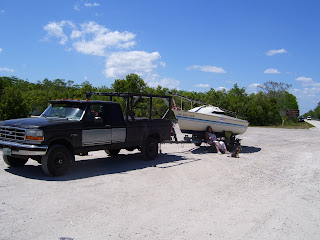 We had a little problem on the Tamiami Trail. Just about in the middle of the Everglades, I happen to notice something in my rear view mirror. At first, I hoped it was just from the big truck right behind me. Alas, the smoke was coming from my trailer wheel bearing.

We were in the middle of the swamp, but at least we had cell service. There was some issue finding someone to come out and pick up a trailer. Called AAA, but they really don't want to deal with trailers. Now I learn there's cheap insurance for that sort of thing. Live and learn. AAA was able to put me in contact with a tow truck out of Naples. He was able to hook me up with a guy in Miami, as it was closer to where I wanted to go. Also, he said Naples closes down at 5 p.m.. The Miami tow truck driver hooked me up with a guy willing to repair the trailer.

After leaving the boat there, we drove down to Key Largo where we had campground reservations. An evening dip in the pool was quite welcome.

Currently, the trailer is sitting in a garage in Miami. I'm told it should be ready by 1. Might be able to get the boat back to Key Largo in time for a late afternoon sail, but we shall see.

-Sixbears
Posted by Sixbears at 10:50 AM