I hadn't gotten much rest last night. That sometimes happens to me in a new anchorage. It didn't help that we were anchored not too far from two boats that had been blown into the mangroves. Maybe the bottom holding for the anchor wasn't so good? I need not have worried as the winds were light and we stayed in place. Once I woke up in a panic thinking I saw another boat's anchor light right next to mine. It was big and bright . . . and the moon.

In spite of the restless night my lovely wife and headed out at sunrise. We paddled to the boat landing I'd found the night before. After locking the kayak to a handy tree we hiked into town. Our first stop was coffee and a breakfast sandwich from Mickey D's. It's not my usual stop, but it was on the way and had outside seating for us dog owners. That, and I really needed a coffee.

We made it to the CVS pharmacy on time. My lovely wife went in while I waited outside with the dog. She came back out empty handed. We'd spent the previous two days trying to set up this medication pick up so I was in a minor panic. There have been times when we've had to stay in a location for a few extra days to sort things out. With a storm on the way, I did not want to do that. However, it was just an hour delay. Much better than “we have no record of your prescription.”

By the time we were back on the boat it was after noon. Winds had shifted directly on our nose. There was no help for it but to motor all the way down to the bayou. I'd picked this spot to wait out a predicted storm so we really needed to get moving. Motoring a sailboat is a drag, but sometimes it's the smart thing to do.

After running aground on the way in last time, we were a bit tense in the channel, especially since it was close to low tide. However, I did learn from my mistake and made it in without a single problem. Once in the channel there was the little matter of finding our spot to tie up in the mangroves. My first choice was a bust as a British boat was busy setting out a third giant anchor right where I'd wanted to pull in.

No problem, as there were still plenty of good places. The guy might have felt bad hogging so much of the anchorage as he rowed over and offered to tie off my mangrove lines for me. That was nice of him, but some things you don't trust to other people. My friends know I'm a stickler for tying my own knots.

There was just enough daylight left to take the dog to shore. With the tide down so low it was an athletic feat to get from the kayak to the dock. Good thing I've been getting a lot of fresh air and exercise.

On the way in we met this barge in a narrow part of the ICW channel. The was enough room, but my lovely wife had a nervous moment. 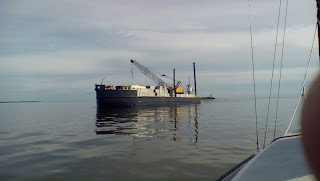 After a nice ham and potato dinner I took a good long nap before getting up to write this bog. Life is good.