On the Beach was a 1957post-apocalyptic novel written by Nevil Shute. It might have been one of the first end-of-the-world books I ever read and it stuck with me. The thing that really got to me was that everyone was basically expecting to die. The fatalism did not go down well with my younger self.

However, this is a totally different beach. 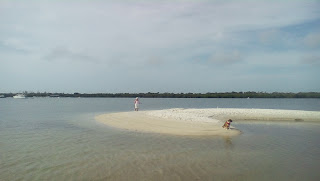 My lovely wife and I paddled to the park to get some ice for the cooler. Later we paddled across the bay to this nice little island. This seems to be the one where people bring their dogs so they could run around. We met a nice local Florida couple who were also giving their dog “shore leave.”

This is supposed to be the last unseasonably hot day for a while. Cooler Saturday, then significant rain is predicted for Sunday. Winds are not favorable so we'll stick it out here for a while yet. We are hoping to get winds from anywhere other than the north as there's where we'd like to sail next.

Tonight my shoulders are letting me know that I haven't been kayaking all that much lately. The last few days of paddling took a toll. From past experience I know that in a few more days I'll be back in the grove.

A dolphin followed us in when we paddled to the park. It was still there playing around when we decided to head out again. The dog sat right up on the bow of the kayak to be closer to his “sea puppy” friends.

We did spend a few hours doing some repair work on our jib sail. Once done we celebrated with coffee& rum. Not a bad day at all.

With cooler and wetter weather is in the forecast, it's not always sunny on the beach, but today it was.

Unlike Shute's novel, my radiation exposure consisted of too much sunshine on my shoulders resulting in a mild sunburn.