The cruising life is known for higher highs and lower lows -often in the same day. My lovely wife and I had that very experience. Tuesday we had dinner at a very nice budget busting place, The Pink Elephant. They were withing easy walking distance of the marina and had outdoor seating that allowed us to have our dog with us.

We walked back to a deserted marina. Earlier in the day there was a power outage on the island and they sent everyone home. Once the power came back on they did not reopen. That's fine as their restrooms and laundry room are unlocked. We were able to do a load of laundry.

The main reason we ducked into a marina was to try to find a safe harbor from the high winds. Unfortunately the winds were exactly wrong and blew right into the marina. The waves tossed our boat so badly that we doubled our lines. One of the lines holding our kayak snapped. The second one held but the kayak moved back far enough to allowed the kayak deck shock cord to get tangled into our outboard prop. With the boat tossing like a wild bronco in the dark I cut the cord then secured a second line on the kayak.

There was no hope of sleeping on the boat. I grabbed our sleeping bags and we bedded down among the marina picnic tables like homeless people. Come about 3 a. m. the tide was low enough that shoals blocked the worse of the wave action and we were able to finish the night aboard the boat. That would be our last night in the not-so-protected marina.

So let's rewind a bit. When we walked the dog to the restaurant we passed a narrow canal. My lovely wife got into a conversation with a local. He assured us that there was a good five feet of depth if one hugged the eastern sea wall. Later at the restaurant we had a long conversation with a drunken elderly single handed small boat sailor who was anchored in the canal. She said the trick is to drop an anchor in the middle of the channel and then back into the mangroves and tie a line there.

After our rough night we left the marina and did just that. It's an amazingly protected anchorage with a lot of wildlife. Free public docks are available for shore access. My only wish is that we'd known about it earlier, before spending money at the marina.

As soon as we were set up the no longer drunk lady rowed her dinghy over and we invited her aboard for tea. We had a delightful conversation and she was a wealth of local information. 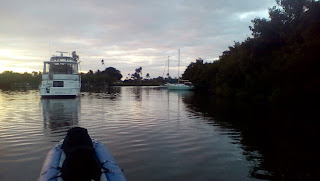 By morning the winds are supposed to have changed. Right now I'm not sure if we'll continue our journey or call another rest day. This is a very nice place to be right now.


-Sixbears
Posted by Sixbears at 9:56 PM