Dufus with a motor

Interesting day at the Gulf of Mexico. My lovely wife and I got to the boat landing bright and early. I fed the bugs while setting up the sailboat, unlike my wife who wore long pants.

The boat ramp was pretty busy, but that's no excuse for my haste. Fired up the motor. It took us just far enough so that we blocked the narrow access channel to the main channel. No problem, we used a pole to push ourselves out of the way.

Noticed the primer bulb on the fuel line was flat. The connector had become disconnected from the gas tank. While fiddling with it, I managed to get a fair amount of air in the line. The motor ran just long enough to get us out in the main channel -where it died and we ran aground.

Well, I thought to myself, got that out of the way. Everyone grounds their boat sooner or later. Eventually, go the motor started and was able to back off the sand.

My wife asked if the motor was fixed this time. Sure, I said. Then to prove me a liar, it died once more. This time the fuel line disconnected from the motor. Hooked it up, pulled the starter cord a bunch of times and we were off again.

Eventually sputtered our way to the end of the channel out to the deeper water. Found ourselves in a patch of stubborn fog that had yet to burn off. To make matters worse, the promised wind was no where to be found. At that point, I suggested we anchor and take stock of things.

While at anchor, we had a bit to eat and a coffee. Everything's better after coffee. Eventually, the wind blew up a tiny bit and we raised the sails. The boat was only moving at about 2 knots, but hey, sailing is sailing. As the day progressed, we got up to about 4.5 knots. Good enough.

The sailing was great. We played the FM radio, and relaxed into the rhythm of the sea.

Wildflower asked us to sail down to Hudson and take a photo. Fell about 7 miles short. Might have made it if we'd decent wind earlier in the day.

Lots of small power boats on the Gulf. Only saw one other sailboat. Most of the power boats didn't stray very far from the channels. We'd hit some boat traffic around a channel, but then we'd be alone until we got to the next channel.

Made it back to the boat landing just fine. This time, the motor behaved itself.

Rough start, but all in all, a mighty fine day. 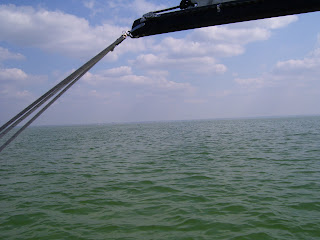 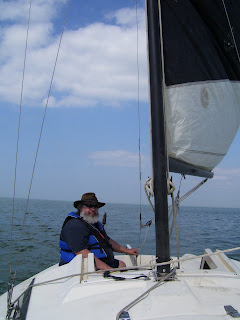 -Sixbears
Posted by Sixbears at 8:24 PM