We are back from another successful sailing trip. I’ve no idea what’s going on in the world right now, and I’m not particularly bothered by that. A sailboat is a world of its own.

My lovely wife left Bayport around 10:45 a. m.. on Tuesday. All our stuff was finally loaded and the boat set up and launched.

We knew we could not reach our destination before dark, but we were comfortable with that idea. The boat has lights, so why not use them?

The sail in the open Gulf was pleasant, but not fast. Mostly we poked around 2 - 3 knots with the occasional burst of 4 knots. Our goal was to anchor off of Anclote Key. It’s not the best anchorage -little protection from east winds. We did anchor there before, so we knew what we were getting into. 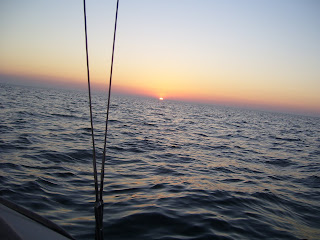 After the sun went down, the wind picked up -strong and from the east. We reduced sail and still moved along at near hull speed. Just to make things interesting, we wandered in the shallows, dragging the rudder in the mud. No problem. All I have to do is pull a slip knot and the cord that holds the rudder down is loosened, allowing the rudder to kick up.

Normally, it’s an easy, uneventful procedure. Normally. For some reason, the cord hooked the ring pin that secured the backstay pin and sent it flying. There was nothing to keep the pin from falling out. Had that pin fallen out, the backstay would come down and the mast with it. At hull speed. In rough seas. At night.

Fortunately, I had a hitch pin in my shirt pocket and jammed it into the pin, saving the backstay, and the rest of the rigging.

The rest of the night sail was busy and wet, but with the exception of the pin incident, we never felt in any sort of danger. I knew there were some spoil islands down the channel that we could anchor behind, out of the wind. 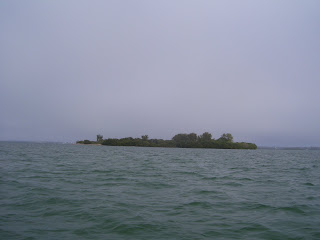 We were very happy to have this patch of ground blocking the heavy winds. I dropped the anchor, 12 hours and 42 miles later. We slept well that night.