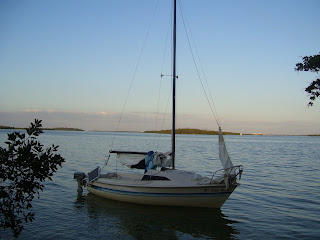 In this photo we just landed. Even the sails have yet to be put away. The boat’s in about 2 feet of water near low tide. On the way in, I dropped a heavy stern anchor. The bow is tied off to some mangroves. My dog was desperate for a landfall, so I got her to shore quickly. After taking this photo, and taking care of the dog, my wife and I buttoned up the boat.

With the swing keel lifted and the rudder kicked up, the Oday 19 draws only about a foot of water. The sailboat can be sailed in that condition. The only problem is that it’s impossible to make any headway against the wind without the keel.

The water was shallow and to make it more interesting, pretty weedy. One time with the keel down we actually picked up enough weeds to stop the boat dead in its tracks. Other times, the swing keep was our depth sounder. I discovered that I could deploy the keel about halfway and that allowed some headway against the wind.

With all the playing around, it took a good hour to go where we could have motored in about 15 minutes, but what’s the fun in that? I had a great time, experimenting and practicing shoal draft sailing. A boat with a deep draft is severely limited in the shallow waters of Florida.

My wife and I are thinking seriously about eventually living half the year on a boat. Our sailing grounds would include a lot of the shallow waters of Florida. Something like a Triloboat would be great. They are cheap to build, roomy, shallow draft, and have a huge amount of cargo space. They also look kinda cool, so that’s a consideration.

I can confirm that it can be pretty inexpensive to live on a sailboat. Of course, that depends on the boat, how much time is spent in marinas, how much one motors instead of sailing, and some other factors. Being able to do repairs yourself with inexpensive parts is key. My wife and I are getting some good ideas about what will be required in the future.

Of course, in the here in now, we are having a blast, no matter what the future will bring.