When your sailboat has a hull speed of just 5.5 knots, distances matter. The stretch from Anclote Key to Bayport has no protection from the open bay. Weather matters. We had a good 27 or so miles to cover before dark.

Winds were out of the east, predicted to swing to the southeast later in the day, good for our northernly route. I motored a short way into deeper water. We raised the sails, dropped the keel and rudder and were off.

It was a lively ride, 2 - 4 foot seas. Fairly often gusts of wind would propel us to hull speed or even a bit more. Just when I would think of reducing sail, the wind would drop some, but still kept us going over 4 knots.

The sun was out, the wind was brisk, and the miles dropped away. There really wasn’t much to photograph except miles and miles of open water. The two large dolphins that surfaced 4 feet from the boat were there and gone before we could even think of getting out the camera.

During one strong burst of wind, my lovely wife’s hat blew off into the water. Seas were 4 feet and we were moving at hull speed. She was willing to let it go, but I declared a man overboard drill. At that point we had to make a good effort to retrieve the hat.

We’ve done man overboard drills before, but not under such conditions. It’s a whole different deal, but that’s when it would really matter. We kept touching the hat with the hook, but between the waves rocking the boat and the wind blowing, we couldn’t get hold of it. The outboard motor slipped off it’s mount and only the safety rope I tied on it kept it from going to the bottom. It took about six passes before we snagged the hat with the boat hook, but we did get it.

I’d entered the Bayport channel marker as a waypoint in the GPS. Winds dropped off and became variable, the last few miles to the marker. I was tempted to start the motor, but my lovely wife had the tiller and wanted to try and sail in. Her patience was rewarded as a light but usable southwest wind came up. We had real difficulty spotting the channel marker. Eventually, we spotted something, and the GPS said it was the right location. Double checking with the chart confirmed it.

The problem was the marker looked nothing like the marker we left behind the week before. Deciding to trust our navigation, we headed down the channel. After a mile it became clear that we made it to where we were supposed to be. Apparently, in the week we were gone, the old marker had been replaced with a new one.

As we pulled into the boat ramp, my dad drove in with my truck and trailer. According to the GPS, we’d done 29 miles in 8 hours. It was a good way to end the week. 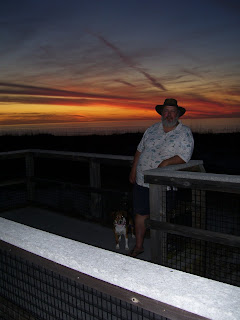