What to do in case of grounding

Caladesi State Park is difficult to leave in a timely manner. It’s just too darn pretty and comfortable. We didn’t make it out of there until fairly late in the morning. By then the wind had died down but it was still enough to sail by. 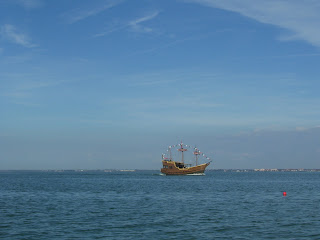 Having never sailed until last year, there’s been a lot of firsts for the lovely wife and myself. After we left the park, we headed to the Honeymoon Island bridge. We’d never had a bridge open for us before. After years of stopping in my car for open draw bridges, it was pretty neat to have one open for me. It reminded me of the fake bridge at a NH amusement park called Storyland. They have a drawbridge for the park’s swanboat and pirate ship. When I said, “Just like Storyland,” my wife burst out laughing.

We had a pleasant sail up to Anclote Key but the sun was soon sinking into the west. We needed the light to attempt an anchorage we’d been told about. Anyone who’s sailed Florida’s waters knows the charts are not always up to date. Whole islands come and go with the storms. A local told us about a channel, 3 - 4 feet deep, that came quite close to North Anclote Key.

Here’s where things get dicey. There are a couple small islands at the north end of Anclote that appear on some charts as North Anclote Key. I attempted to find a channel up near those little islands. When wading birds appeared in front of me, I realized there was no channel. The boat grounded, but I was able to put the motor in reverse and back off.

We turned around towards deeper water, but didn’ get very far before getting grounded once more. There was no motoring off this time. There was only thing to do: make chicken soup. Since we weren’t going anywhere anyway, I set up the stove and cooked dinner. After a leisurely dinner, dished were cleaned up and the cooking gear put away. Just as we were contemplating what to do next, we floated off with the rising tide.

Once we got into deeper water, I dropped the hook for the night. Anclote Key isn’t the best of anchorages. Wind protection from the North and East is poor. That night, wind was predicted to come out of the North at 5 knots, then move to the East at 15. That’s pretty much what happened. I was extra cautious setting the anchor. The night was bit rolly, but the anchor stayed put and we got some sleep.

Only later did I figure out that my local sailor must have meant the Gulf Harbor’s Sand Bar, also known as North Anclote Bar. There is enough water for a shallow draft boat like mine to get quite close to the shore. On my chart, it doesn’t look like much. From on the water, it’s an actual island with vegetation growing on it. The next time we go down this coast, we hope to stop there. Live and learn.