Rest Day, or so we thought

After two days of hard sailing, my lovely wife and I decided to take a day off. The plan was to check out the island, hang out on the beach and generally take it easy.

That plan worked until the early afternoon. That’s when the boats started coming in. The night before, there was only a handful of boats in the entire marina. As Saturday wore on, the boats just kept coming in.

In the photo, if you look closely, you’ll see two sailboat masts. The shorter black mast belongs to my sailboat. As you can see, it’s completely overshadowed by large powerboats. 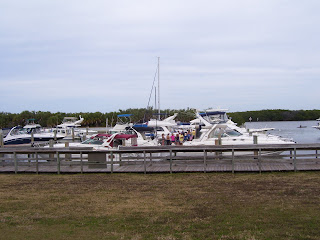 As they came in, they’d tie up, connect water and power, and unload folding chairs. After the chairs were set up on the docks, the drinks flowed and the music played. My lovely wife and I introduced ourselves to this party crowd. All of them come from just a few miles away. They party at the island almost every weekend.

So they’d be comfortable, we broke out our bottle of rum and had a few drinks. Most of that crew had a whole lot more to drink. After a while, it did get a bit awkward. The guy next to me, well into his cups, started telling me how much he envied me and my small sailboat. This guy had a huge powerboat. His dingy cost more and had triple the power of my sailboat. However, his wife never let him go anywhere. All he ever wanted to do is to sail a small boat up and down the coast as the whim struck him, but he never had any time off from work.

The party got a bit wild as the night wore on. My wife and I wandered off to hang with a different group that had a nice campfire going by the park pavilions. We connected with a nice young couple, also sailing an older small sailboat (a Catalina from the late 70s). Like us, they were traveling with a beagle mix. They were actually impressed with what I’d done with my boat: cup holders, electrical system, running lights, stainless steel boarding ladder, compass, and the new tiller. Their boat was so bare bones it didn’t have running lights or even a compass. Since all their sailing was in familiar waters during the day, it didn’t matter that much.

Eventually, we made our way back to our boat. The party was still going strong, but mostly confined to one of the larger boats. The noise wasn’t too bad, except when people would open and close the door. Then a blast of sound escaped. In spite of that, we didn’t have that much trouble falling asleep.

In the morning, we decided to have our coffee and breakfast back up at the pavilion. The other sailing couple mentioned they didn’t have everything they needed to make coffee, so I invited them to join us. After a pleasant breakfast, we threaded our way past the waking party zombies and quietly exited the marina.