We raised anchor at Anclote Key and beat our way to the start of the ICW channel. Never being one to color within the lines, I left the channel behind and went to the open Gulf. Seas were 2 - 4 feet and wind from the south, but there was wind. We beat our way in the open Gulf most of the day.

I was having a blast, sailing along further and further from land. My wife brought me back to earth by pointing out I was sailing past our channel. Hurricane Pass is hard to spot from the Gulf side. That’s where even my simple GPS came in handy. Good thing my lovely wife pays attention to such things. 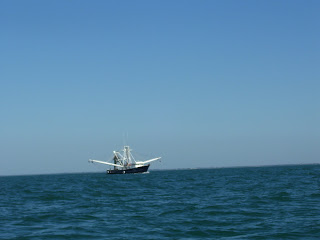 We negotiated the shallow pass between Honeymoon and Caledesi Islands. Then I had to motor up wind through a shallow bay towards Caledesi State Park. I totally missed the narrow channel into the park. There’s a large area heavily posted with “no internal combustion engines” signs. I stayed too far away from that area to see the tiny gap into the park. The park isn’t visible from the bay as it sits among mangroves.

Once again, my lovely wife discovered my error with the chart and GPS. By hugging the “no engine” area we eventually found the narrow channel to the park and got there just before sunset.
Caledesi has a beautiful little marina with good floating docks equipped with power and water. We missed the regular staff to sign in, but the volunteer said it wasn’t a problem. They’d get to me in the morning.

The park volunteer was a robust man in his 80s. Chatting with him I learned that he’s from about 40 miles away from my home. His wife comes from 20 miles away. We knew a lot of the same people. Friends of mine have a camp on the same small lake in VT that he has a summer place on. Small world.

The volunteer gig is a pretty good one. I don’t know the details, but this guy’s been doing it for ten years. There’s some light duties that need to be done, but he can keep his boat at the docks. It’s a beautiful place to spend the winter. The island feels like a remote wild area, but civilization is a short trip across the bay. He says he’s so happy on the island that he rarely goes anywhere else.

After a late dinner after sunset, we called it a day and turned in early.