We left Caladesi State Park and killed the motor as soon as we left the park’s narrow channel. The sails went up, but the wind went down. When we did get any wind, it was usually from the south -the direction we were trying to go in. A day’s sailing only got us down as far as Clearwater. 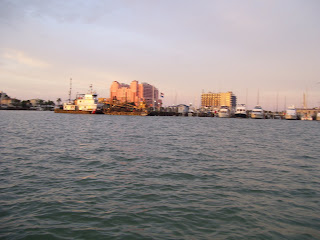 Florida winters feel a lot like New Hampshire summers, but the sun still goes down early. One if the things I wanted to do before dark was to buy a little gasoline. I’d burned about 2.5 gallons of gas. That doesn’t sound like much, but it was half my supply. We docked at the Clearwater Marina for fuel. While we were there, we took advantage of the courtesy dock. That gave us a chance to walk the dog and check out the waterfront. Next to the marina, we found a little restaurant that was dog friendly. 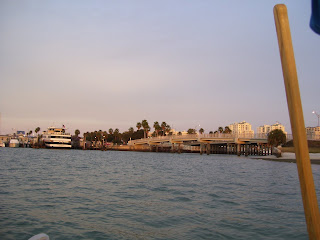 After dinner, darkness had fallen. The marina charged 2/foot, but I could see several boats anchored in the harbor. That’s where we spent the night. My new anchor paid for itself pretty quickly this trip. 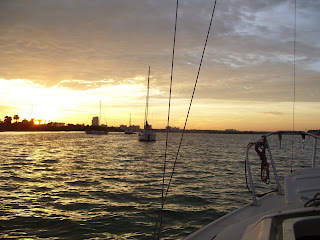 The day’s sail was pretty disappointing as far as distance traveled. It soon occurred to us that if we were going to make any distance at all, we’d have to motor the whole way. Winds were predicted to be in our face the whole time. As we were approaching “The Narrows” we would have little room to tack. Rather than motor through condo canyons, we decided to turn around and head north. 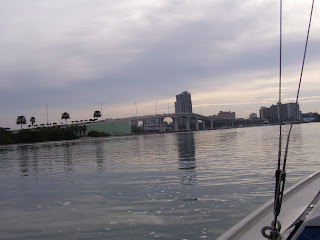 The original plan was to make it much further down the coast, however, the real goal was to enjoy ourselves and sail. The next morning, we hauled anchor and headed back north to Caladesi.