Head for the hills

Vacation homes here in the North Country have filled with folks fleeing the cities. That’s all well and good, but I wonder how many of them have brought the corona virus with them? Then there’s the fact that our local hospital can’t even take care of the locals. I just hope they will self quarantine for two weeks like we are doing.

By the way, we got almost a foot of snow overnight. Kinda bummed out to see the boat buried in snow. That’s the reason why we weren’t expecting to come north until a month or so from now. 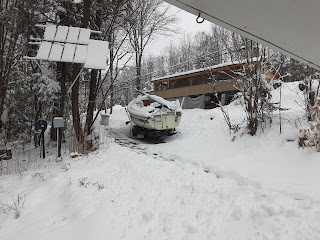 I’ve been thinking about how the government wants a big slush fund of money to support businesses. Current proposals don’t even have many safeguards. They can pick who survives and who doesn’t. There’s a name for that sort of thing and it’s not Capitalism.

Frankly, I wouldn’t mind if a number of industries were quietly left to die. Take cruise ships for example. They are all flagged at ports of convenience to avoid US taxes and laws. Now that times are tight they want support from the US government? Those polluting disease incubators can all be scuttled as far as I’m concerned.